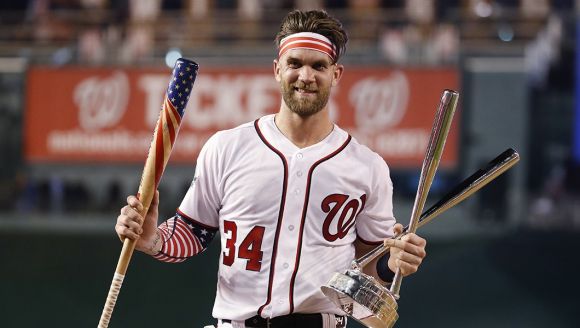 As if there was any doubt, damn near anyone wearing an MLB uni can hit dingers in bunches.

This seemed to be the message in the 2018All-Star break's BombFest in Washington DC.

The powers-that-be offered up Atlanta's stalwart slugger, Freddie Freeman, to lead a competent supporting cast, but it seems the event was built around two name brands:

It's understandable that moonshot luminaries like Mike Trout, Giancarlo Stanton, and Aaron Judge would take a pass this year, taking the been there, done that route.

Boston's JD Martinez and Cleveland's José Ramírez currently lead the majors with 29, so they don't seem interested in messing with their strokes in something that doesn't really count for anything.

It's cool that the Dodgers' Max Muncy was in the bracket. Dude's the only contestant who started the 2018 campaign in AAA-ball after being released by the Oakland A's last year. Great feelgood story.

But this edition of the Home Run Derby was always gonna be about Harper and Schwarber.

Happy ending in the District! $1 seats for specified games!

One woulda thought that was that. Homeboy basks in come-from-behind glory.

Here we are, in a nation where conspiracies have become a cottage industry, now witnessing controversy over a ginned-up bop-a-thon.

Schwarber had the gall to hit lotsa home runs in the final, which actually earned him boos from the locals. Amazing. Not even Cardinals fans boo Schwarber, and they're the best fans in baseball, for chrissakes!

Now that they've got winners, Cubbies' faithful are getting a little testy about the times they don't win.

Who knew Home Run Derby truthers was a thing?

So r we just ignoring the fact the Bryce Harper & his dad cheated & did not follow the rules of the #HomeRunDerby ? The previous hit ball must hit the ground before the next ball can be thrown to the batter. Harper needs 4 Home Runs taken away, video evidence. #Justice4Schwarber pic.twitter.com/u0B5FPAlfV

The Nationals visit Chicago's North Side on Fri-Sun 10-12 Aug. The gauntlet's down.

Let's see how creative and/or vindictive Cubs Nation will be then.

Over a bloody ball-swatting exhibition.