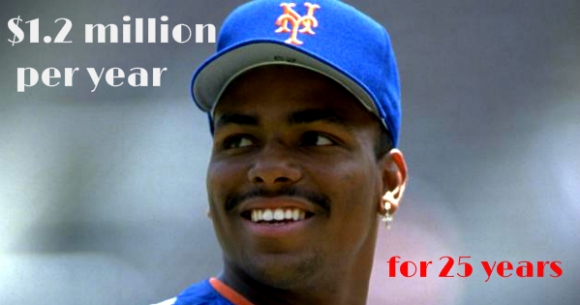 OK, it's also Canada Day, which the Cleveland Indians were happy to celebrate this year, but we digress.

For the rest of MLB and the New York Mets', the genesis of this most very special of days is not widely known, but compelling nonetheless.

Yes, you read that correctly.

The 53-year old Bonilla, whose last MLB appearance was in 2001, still resides on the Mets payroll and will remain there for the next 19 years.

Dude spent four years with the Mets in the mid-90’s, but returned for a second stint in 1999.

The aging star was well past his prime at this stage of his career, and the Mets quickly lost interest. However, they still owed him $5.9million for the 2000 season.

To avoid paying him said money at the time, those judgment-impaired Mets agreed to defer the payments based in part on an annual interest rate attachment.

Please keep in mind that the Wilpons, who owned the team at the time, were in bed with Bernie Madoff, orchestrator of the most massive financial fraud in USA history in the form of an elaborate Ponzi scheme.

Deferred-money contracts are fairly common in MLB. However, the infamous tale of Bobby Bonilla, for whatever reason, remains the most remembered and widely mocked of them all.

Fortunately, we have a specific day every year to celebrate this absurdity, as well as to ponder the baggy pants farce that is your New York Mets.

So go out there and join in the festivities by pulling out a credit card and exceeding your limit.