Hamels No-No: His Lovely Parting Gift to the Phillies 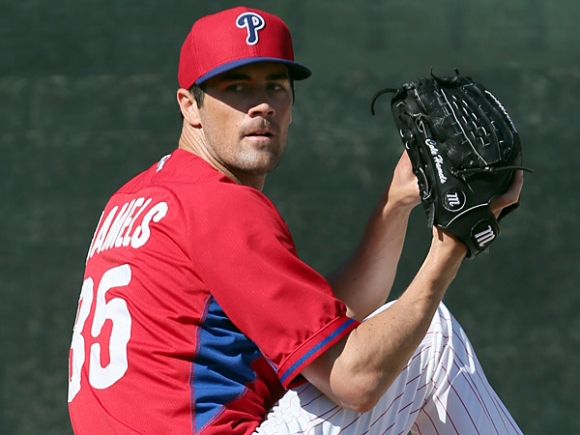 Philadelphia's baseball faithful haven’t had much to cheer about this season, except for the imminence of their GM's ouster.

The league-worst Phils are looking towards the future, but first they need to move big pieces of their past.

There are only a handful of players left from their World Series days and even fewer still who possess any actual trade value.

Chase Utley is having a career-worst year, and former league MVP Ryan Howard has a contract as immobile as he is. At least the Phils still have former Series MVP Cole Hamels to help build their future.

The trade saga of Cole Hamels has been a running theme for the Phillies all season long. Dude's enjoyed modest success this season, but the poor state of the team has greatly affected his win-loss record.

As if that's a major factor for teams coveting his services.

Still, recent starts have seen Hamels stumble several times; he'd surrendered 14 earnies over 6⅓ innings through his two starts coming into yesterday's Cubs game. This most certainly affected his trade value, as the Phil’s were reportedly asking for up to six prospects in proposed trade packages for the ace.

So, with little more than a week left before the 31 July non-waiver trade deadline, the club needed Hamels to come up big in what some were calling his most important start as a Phillie. And yet again, dude delivered when it mattered.

Damned if Odubel Herrera didn't almost Phil it up on that last out.

Hamels was dealing, striking out 13 Cubbies while only walking Dexter Fowler twice. The lefty needed 129 pitches to rack up his first solo no-no -- he was part of a group effort last season -- but that didn’t seem to matter with his trade valuing rising by the out.

While players were celebrating, management was ramping up its chance to take advantage of Hamels' improved value.

In a perfect world, Hamels would retire an all-time Phillie, but when a team flounders in the basement year after year, everybody's available. No matter how much they have done for that team.