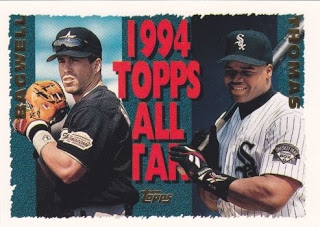 You'll find two names on this year’s 2014 baseball Hall of Fame (HOF) ballot that are similar in many ways other than being right-handed slugging first-basemen during the 1990’s.

They both deserve to get elected to Cooperstown.

Their careers are virtually identical. So much so, it makes the reading of the Atuk script look like open mike night at a local college pub.

It all started with the day they were brought into this earth. Although, nobody could mistake them for twins separated at birth.

As you can see, both players' careers paralleled each other nicely, they're not just both Geminis, and it's fitting that they both appear on this year’s HOF ballot together.

Will they add one more bullet point on their résumés as members of the 2014 Hall of Fame class?

They should, and it would be even more fitting if their plaques were displayed next to each other in the gallery at Cooperstown.