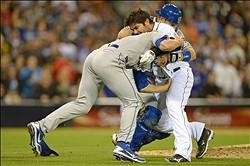 With the economy being what it is, just about everyone is trying to make sure that when they buy something they get the most for their investment.
The Dodgers are no different.  Maybe when they signed Zack Greinke to a six-year, $147million contract, they were going to cross-train him as an MMA fighter.
On Thu 11 April, Greinke plunked Carlos Quentin with what Greinke is calling a stray ball. As the slugger started toward the mound, Greinke appeared to say something and stuff snapped.
First, Quentin's temper, and then Greinke's collarbone.
The incident looked harmless; they both seemed to drop their shoulders and collide. Quentin tackled the pitcher to the grass. Both ended up at the bottom of a huge pile of players.
Like noses, everyone has an opinion about who is at fault. Most say Carlos should have controlled himself and is the culprit. But really, is he?
What do we know? Carlos Quentin had been hit 115 times before this incident, and not once did he react in that manner. What was so different about 116? Maybe it was because Quentin was also hit by a pitch during Tuesday’s game with the Dodgers, and many feared he had broken his wrist after that incident. Clearly, he was fed up with being target practice for Dodgers pitchers.
To add insult to injury, it's been said that  Greinke rubs some players the wrong way. He can come off as smug. Of course, like most pitchers after nailing a batter, Greinke proclaimed innocence. Given that it was a one-run game at that point, maybe he was. Given that it was a 1-2 count and Greinke seemed to have strong command of his pitches, maybe he wasn't.
There is a lesson to be learned. If you are a 190lb pitcher and  you decide to throw inside and hit a player, think twice about choosing a 240lb former high school football player. If you do 'accidentally' hit him, keep your mouth shut.
And if that doesn't work and you see him charging the mound, look for a safe spot behind Mark McGwire instead of dropping your shoulder.
The biggest losers are the Dodgers, with Greinke sidelined for an indefinite period. And although Thursday was the final game of the series, it’s unlikely the two will have forgotten everything when they next meet.
Circle your calendar for Mon 15 April at Dodger Stadium.
DAILY UPDATE