Got Tickets, Rain or Shine 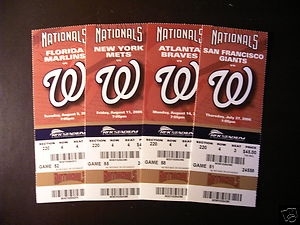 The people have spoken.
Via social media and their box office phones, fans of the Washington Nationals were screaming loud regarding the team's new rainout ticket policy.
Their voices were heard. The Nationals were forced to reverse the new unpopular ticket policy.
Following Tuesday night's rainout against the Detroit Tigers, the team had originally vowed to stand firm to its new policy, which was basically that fans would not be able to exchange a ticket for an equal- or lesser-priced ticket to a future game of their choosing. Rather, fans were told the tickets would only be honored for the makeup game, which ws scheduled for 4.05pm local time on Thursday.
As we saw, this stirred auite an uproar.  Fans insisted that this was an inconvenience because they workd day jobs or had hectic travel plans.
The public backlash quickly turned to hysteria that became so strong, the team was left with no choice but to overturn it.
In the Nationals' defense, the rule was in fans' best interests regarding seat availability. In the past, fans were allowed to exchange tickets from postponed games. But attendance has grown, and as a result, fans last year who tried to exchange tickets could not sit in the same seat or section. The policy was meant to alleviate that concern.
So, like most new policies that are meant to solve one issue but are implemented poorly, the Nationals learned they had inadvertently created a more vexing problem. Unlike politicans, though, the Nationals heard the outcry and quickly released a statement reversing the policy and included an apology to fans.
We all can learn alot from the Nationals. It's impossible to please everyone. It's better to upset a few and take into consideration the majority. Then, when an honest mistake is made, learn the lesson and correct it.
Now, if those other dudes in Washington would only do that.
DAILY UPDATE