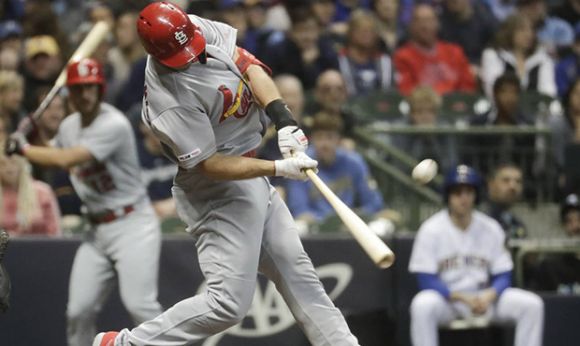 The St Louis Post-Dispatch referred to new Cardinal Paul Goldschmidt as Comeback Player of the Day.

Dude missed all the Opening Day fireworks by fanning thrice but balanced the K's quite nicely by going deep three times on the season's second day.

It was like the Los Angeles Dodgers passed him the bomb baton after blasting a record eight dingers against the Goldy-free Arizona Diamondbacks.

Yes, there was a lotta that going on.

Milwaukee's yard has a Park Factor of 118, making it MLB's second-coziest confine behind perennial leader Coors Field. The new St Louis 1B was likely aware of this.

Goldsmith's history of punishing NL Central pitching portends to ominous winds within the division. For example:

Goldschmidt's a veritable powder keg of power, a career .297 hitter with a .930 OPS who's hit at least 20 home runs in six of his eight career seasons and has knocked at least 30 bombs four times.

Dude apparently loves hitting in Miller Park so much, he damn near scraped his hands on his belt buckle in his second AB of the night and still took Freddy Peralta deep and then just kept on going:

The Make a Wish Foundation is gonna be flush with cash with Goldschmidt on the scene.

The Brews had seen enough. Trailing 9-5 in the ninth, they walked him intentionally in his last AB, preventing him from a chance to tie Hard Hittin' Mark Whiten's four jacks in one game.

Then there were the Dodgers on Opening Day, banging souvenirs aplenty into the cheap seats:

Damn. The Diamondbacks weren't kidding when they said this would be a rebuilding year. They spent Opening Day rebuilding Dodger hitters' stats.

As to the Bums, they've won seven straight NL West titles and -- since they get to play Arizona 17 more times -- have got a serious shot at making it eight. The downside is their fellow contenders have the same opportunity.

Believe it or not, LA's blast parade only accounted for 16⅔% of Day 1's mind-boggling and record-setting 48 homers:

And pitchers might wanna think longer and harder about padding their caps.