Going Low in the Desert 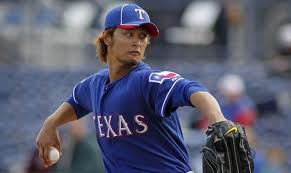 The Texas Rangers and Arizona Diamondbacks play a day-night doubleheader in Arizona with what's shaping up to be an attractive pitchers' battle in the nightcap.

Texas sends Yu Darvish (7-2; 2.84 ERA) to the mound facing Arizona's Tommy Cahill (3-5; 2.81) in a match-up where not only are both pitchers having nice seasons, one has been flat out dominant against the other in his career.

That would be Cahill, who owns a 9-4 record with an ERA of 2.78 against Texas going back to his days where he faced them regularly with the Oakland A's. Our Bovada data tool on the Home page shows also that his last five starts against Texas have been pretty good. Cahill, over that span, has given up just 15 runs in those games. His record in the five is just 2-2 with a no-decision, but in terms of quality starts (minimum six innings pitched and maximum of three earned runs), he has three. Look for Cahill to continue the trend of keeping Ranger bats quiet tonight at Chase Field.

Darvish has never seen the Diamondbacks before, and for that, Arizona is probably glad! Darvish owns seven wins right now and an eighth would tie him for a major league high. There was considerable concern from the media about Darvish averaging 121 pitches in a stretch of three straight games, but he followed that with a 101-pitch gem last week against Oakland, only to lose 1-0. He left that game, however, with a major-league high 91 strikeouts. With this guy, at least for now, there shouldn't be much reason to worry about his pitch count. And against a team that's never seen his wide variety of pitches, it could really be dicey for the D'backs.

This is a bit of a tricky play perhaps, because Bovada hasn't yet (at the time of writing) set a line due to this being the second game of a doubleheader. Many places in Vegas have the game total at 8, and that's what the article is based on.

I love the under here. Cahill's history against Texas is a long enough string of success to make a case he will have a good night and Darvish, well, he's Yu Darvish: one of the best in the bigs. And I only think the fact that Arizona hitters have mostly never seen him before only helps keep this total low. Provided it doesn't get to 6½ (which it won't), go with the under for this game.

My pick: Texas Rangers vs Arizona Diamondbacks, second game of the double-header     under