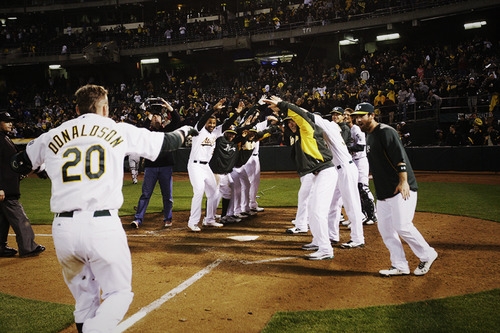 Since we've hit the All-Star break in the Majors, some of you may be pausing to lick your wounds, while others are counting your blessings.

Those would otherwise be known as winnings in the betting world.

But whether you're up or down at this point, I thought it would be a good time to reveal some very noticeable trends from the first half of the season. They might help make it a profitable stretch run for you the rest of the way.

And just to make it easy, I'll narrow all the focus into one profitable division - the American League West.

As we see from the chart in Bovada's data tool on the Home page, this is where the league's most profitable team resides, based simply on $100 units alone: the Oakland A's (+$1423). And with the addition of Jeff Samardzija to a solid yet unheralded staff around him, I think they'll continue to provide a steady flow of profits for their bettors the rest of the way.

But don't let the winnings stop with Oakland. After all, they take days off, and I don't like to take days off from winning.

Take note of what's happening with the Los Angeles Angels of Anaheim. Not only are they the second most profitable team in MLB -- and not far behind Oakland at $1368 -- but they also are the best bet in basbeall as a home team.  You'll see on the Bovada data tool -- on the Home page, find MLB and click standings -- that the Halos have registered a $1211 figure for $100 bettors when playing at the Big A; that's the best home figure in all of the bigs. So when the Angels are home, for that reason alone, they give you a very reasonable chance at winning.

Now, to find out who does best away from home, we'll stay on the Left Coast for the surprising Seattle Mariners. They find themselves seven games above .500 at the break, and very much in the wild card race. You can look at their play on the road as a big reason for that. The M's are nine games above .500 away from Safeco Field at 27-18. In terms of dollars and cents, which is what matters here, that translates to a figure of an MLB-best $1400.

Now, here's another trend in the same division that's been money in the bank for bettors so far, and that's betting against the Texas Rangers at home.

Texas is an MLB-low -$1299 when bet on at home. Making it simple, Globe Life Park is a launching pad, and the Rangers don't have many hitters anymore. Not with the recent departures of Josh Hamilton, Ian Kinsler, and Nelson Cruz, just to name a few. They also have little help in pitching to keep opponents off the base paths. When the Rangers play at home, there's no better team to bet against than Texas.

For that matter, they aren't a bad choice to bet against altogether. Texas is the only team in baseball with fewer than 40 wins, at 38.

So get ready, the dog days of summer are just about over and playoff races are about to take shape. Hopefully, your team is going to be in the mix. But as for your chances to cash in, the pot of gold seems to be in the American League, and all you have to do is play out West.

Enjoy the All Star game and the rest of the season!