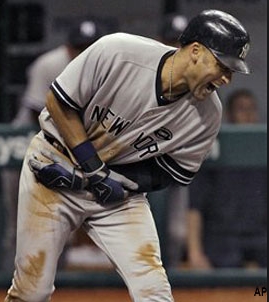 Back in the day, one of the most intimidating pitchers in MLB history had his own unwritten rule.

Bob Gibson's credo was that the batter owned the inside half of home plate, and the outside half was his.

If a batter leaned in too much for Gibson's liking, looking to cover that outer half, the St Louis Cardinals' Hall of Famer would send him a 95mph reminder. Direct mail.

Suffice it to say that way of thinking was part of what made Bob Gibson the legend he is:

Odds are New York Yankees manager Joe Girardi would agree with much of what Gibson's saying. After all, Girardi's Old School, too. So he gets it.

What he apparently didn't get came to the fore last night in Tampa:

Well, there was a history of sorts. Recent history.

Taking a look at the gas Rays hurler Steve Geltz uncorked toward Jeter, it looked quite similar to the Milwaukee Brewers' Mike Fiers' tailing heater that took out Giancarlo Stanton's face. However, where Fiers had a middle-in target, the announcers in Tampa took note that catcher Ryan Hanigan was setting up outside.

Baseball has seen major changes since Gibson played, including the mound being lowered six inches after his 1968 season. Here are two that have had a profound effect:

In the former, batters have less fear of being plunked and have made a practice of diving into outside pitches, with strong results. In the latter, with zones being called lower, batters dropping into pitches has become even more pronounced.

Both of these tendencies leave them wide open to inside pitches, whether its a surgeon like Gibson or a scattergun like Geltz and the other Tampa Bay newbies. Or, of course, Fiers.

Girardi has enough experience and intelligence to realize this. Listening to how he draped last night's gripes in baseball's version of chaos theory when talking about going after hitters, he also surely understands that the way the game has developed, it's more surprising there haven't been more incidents.

So stop with the whining and excuses.