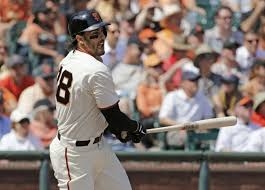 Having made mincemeat of the Twins, the Cubs, and now stacking the deck against the Cards, the Giants have hit the quarter pole in fine shape.

Even though the woeful Cubbies briefly dented their fender, the insurance -- in the form of a decent lead early in the NL West -- will cover it. For now.

In the meantime, it's been more of the same from Mr Morse.

Dude's been on the Adrian Beltré career arc:

Giants fans will take it.

There's been more than one reference to Michael Morse reminding G-Fans of the great Jack Clark. As noted, Morse did little to dispel any such rumors in the first game with St Louis. He's has proven himself to be every bit a Jack Clark-sian caliber player thus far.

They may look alike, but fortunately for Morse, they don't think alike. So he didn't make any claims about Albert Pujols being on the juice and apologizing for it later.

That wouldn't play too well in San Francisco, anyway.