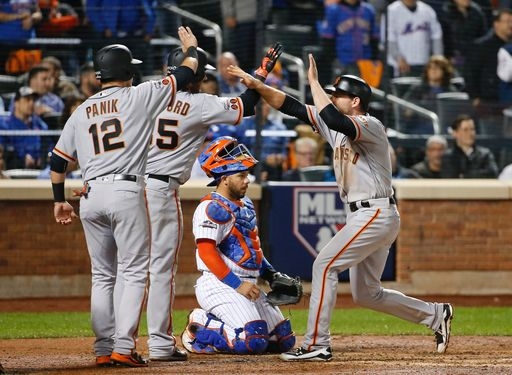 In hindsight, there was only one surprise in this game.

It's that power-hitting pitcher Madison Bumgarner didn't pop the bomb that knocked the New York Mets out of the playoffs.

Instead, the amazing big-game right-hander spun his third career post-season shutout and left the hitting heroics to yet another of San Francisco manager Bruce Bochy's role players.

That would be the unheralded Conor Gillaspie, putting paid to a 3-0 victory:

The Cardinals just missed October baseball by one game this year, ending a string of five consecutive appearances. The Red Sox are back after a season of re-loading its roster with perimeter players.

This year, if they're to repeat, San Francisco will have to prevail in the ultimate clash of karmas.

It's crazy that the division series are only five games, which is not long enough to show the roster depth that made teams winners.

The exception is the Wild Card winner. In this case, Bumgarner will likely only get one start.

For a team that absolutely stink-stank-stunk in the season's second half, It's incredible the Giants are still playing.

But, it's an even-numbered year.