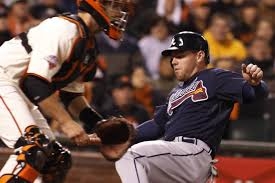 But my theory of players excelling against their old teams continues to be verified day-in and lights-out. It will soon be enshrined in the Daily Player hall of fame as Spock1’s Rule. Courtesy -- but not curtsy -- of Pence and Frandsen. Casilla is Mamma Mia, knee I say more. Torres was torrid. Scutaro skedaddled while Blanco plunked. Posey posed a threat to the wild one who pitched like a guy who had lost the last letter of his surname.

Quiroz wasn’t that cute but it didn’t matter as the Giants saved face and avoided revisiting the heady days of George Orwell. Giants fans, tired of the blues, look forward to the day when Vogelsong will change his tune. With the Braves in town, now would be a good time.

Bochy exuded the merits of the team’s late-inning heroics to the press. The end of game pogo dancing continued to provide an entertaiining spectacle for the throngs at AT&T Park. The two ostensibly playoff-bound teams are now squaring off to determine the fate of the orange-and-black’s tenuous grasp of first place.

What is really sweet is the Dodgers’ seven-game losing streak. But with the Rocks perched for an avalanche and the Snakes on the plane, this is no time to abstain from going easy on the so-called Native Americans. Yeah, their namesakes had a tough go of it, but today they are billionaires thanks to plumb court settlements and deals with the fork-tongued gaming providers, deftly sticking it to their former persecutors in the form of gambling addictions and negative environmental impacts from mega-casinos in their once pristine suburbias.

If the Giants can keep their scalps on, they can send the Braves back to their casinos with less of a jingle in their pockets and no cherries.