Giants Diary: What, We Worry? 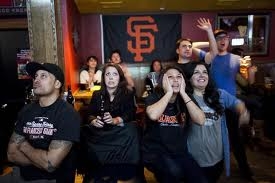 Giants fans are breaking out the hankies and firing up Tom Petty.

The slings and arrows of the many ignominious ignominies that Giants fans have been forced to endure of late have been taking their toll. As the reigning World Champions are freefalling down the National League Western Division standings, the laughter of Dodgers fans becomes an unbearable cacophony that can be heard all the way to King Street.

What will become of the Orange and Black? The baseball season is a long one, and as Buster Posey pontifically pondered, the All-Star break looms nigh. A little rest to help with their difficult task of wresting control of the NL West back towards San Francisco may do the trick.

As the Giants plummet towards the cellar, fans are groping for whatever relief might be available from the many shelves as they fall past them down the rabbit hole with rabid expressions. Yet as the losses pile up, Dodgers fans will elate as they can be expected to continue to Kickham when they’re down.

To kick a dead horse, by inserting Mike Kickham into the starting rotation, the Giants would appear to be punting. G-fans are crying out to savior Sabean to cough up the dough for some trade tonic. All of the continued L’s piling up on the the Giants' seasonal record might yet be assuaged with a fresh dose of select castoffs and misfits. But Sabean continues to play his cards close to his breast, poker face in hand.

The Giants' losses are at least a gain for the unflappable Juan Perez. With a Crick in their gait and Belt’s shrinking waste line, Giants fans, already blessed with astronomic prices for gastronomic delicacies at AT&T Park, may believe this is no time for belt-tightening. They want a trade now for some pitching and hitting talent to refill the ranks of their depleted roster.