Giants Diary: Vogelsong Continues to Be Out of Key 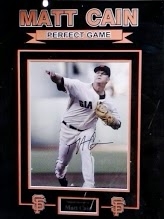 As the old Stones tune opined, baby, baby Vogelsong was out of time, out of there without a doubt. Melky and crew helped to melt down the Giants again. It was bad luck to give him that diamond-encrusted bauble.

Good riddance to Canada. The orange-and-black should get well against those upstart Rockies. With Matt Cain pitching against them they will look like the shoddy expansion franchise that they basically are.

It’s the beginning of the curse of Scutaro. For the callous blockbuster trade of their loyal shortstop to their division rivals, the Rox are doomed to fall apart by the end of the season. The Giants will be a dynasty that will reign in the NL West for years to come.

The powers that be wisely advised Matt Cain to stay at home in San Francisco, thus sparing the right-hander the angst of viewing the Blue Jays pecking the eyes out of the reigning World Series Champions.

Even though the team played like bird doo, Giants fans can take solace in the fact that their club is still technically in first place. They may, in all seriousness and with the baseball gods on their side, the wind at their backs, and the Dodgers still in last, look any fans of the other competing franchises in their division squarely in the eye and soberly express this timeless baseball message…”Neh, neh, neh-neh, neh!”