Giants Diary: The Harder They Come to LA 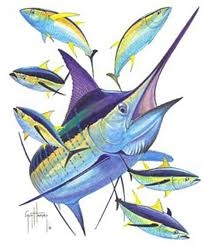 The way that the Marlins dismantled San Francisco, one might have thunk that the Giants were facing Conine and the Barbarians from 2003 rather than the pitiful flounders of 2013, who are even worse than Houston.

Apparently, fish doesn’t agree with the big guys. The Orange and Black are proving the theory that the bigger they are, the harder they fall.

The Giants have stunk quite badly of late, though they can rightly fall back on the age-old sports excuse of being injury-raddled. Riddled or raddled, fish or Fiddle-Faddles, something must be awry in their diet. I have a few ginsengs left in my K-Mart K-rations I can lend them ‘til Tuesday next.

Things should get better soon, though, now that Pence has grown a beard. (Well, have you got a better rationalization?)

With fellow Killer P Panda due back in the nick of time to face that LA club, the Giants may have a fighting chance. Unfortunately, it looks like they might even have achieved a certain parity with the NL Western Division under-achieving cellar dwellers.

How exciting: the battle of the crippled big leaguers. Two beleaguered California franchises with their hobbled masses. The gimps are due to go wild at Dodger Stadium. Let the least physically impaired win the series.

Luckily, pitiful results of late notwithstanding, the Giants are still very much in playoff contention. Thanks to their membership in the division with the first-place team possessing the worst winning percentage of division leaders in baseball.

Jimmy Cliff would relate to the dues that the Orange and Black must pay, so much harder do they come to LA.

Here’s some important advice for the Giants pitching staff: don’t nobody walk in LA. In such a looking glass as La-La Land, the Giants need a new attitude, an unreality check, right now.

Skunk the blood tests! Time for Lincecum to break out the bong!