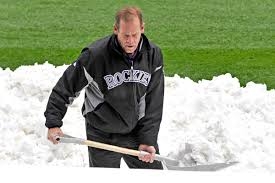 It was inevitable that the San Francisco Giants' winning streak against Walt’s team would come to an end.

It must have felt good to the Rockies, so good that they were compelled for a repeat performance or two.

In the one positive result for the Giants up in the Rockies, Matt Cain proved the least ugly of the two starting pitchers of the day. San Francisco was able to chase Chacin for one ugly win up in Colorado. The rest were wrested from them due to a streak of poor play indicative of a team in disarray.

In the early days of his career, Matt Cain pitched awesomely, allowing less runs than the finest of stockings. But he never received any run support in return. So he was left holding the bag with a poor won-lost record. Getting picked up in the rarified air was karma vindication for the Giants ace.

After that, it was all bad karma as Weiss’s revenge kicked in. The Giants then performed an excellent imation of the Astros. Their defense deteriorated to the security of a remote border crossing after the sequester.

Zito won the award for the least worst starting pitcher for the stop in Colorado. As fans and media count their remaining blessings, the Giants know how fortunate they are to still be in contention, albeit this early on in the fray; luckily, the rest of the division stinks, too.

The divisional prize this season goes to the team that stinks the worst. Three-out-of-four-peat assured!