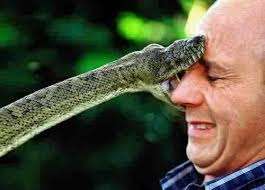 The San Francisco Giants take to the road with fangs still dangling from their derrieres and other sensitive areas.

The effects from Diamondback bites are the only possible excuse the Giants' lackluster play. I would recommend a strong dose of ginseng for more energy mixed with a double helping of ginkgo to remedy their numerous mental lapses that caused them to bungle their first series of the year with the desert reptiles.

It is hoped by this partial poster that the pious Padres will provide an antidote. The team gave too much ground to the gregarious Gregorius and paid the price for allowing the desert marauders to pad their win column.

Scuturo failed to scoot while the Killer P’s were pedestrian at best. Poor Pence has been hitting like pennies instead. Posey was pondering on the pine and Pagan was less than divine. Pennington and Parra parried the hapless players plying the orange and black.

Pound for pound, the Giants’ participants produced little production when their umpteen comebacks fell precariously short of the late-inning pace. Cain is in one of his bad luck streaks again. He might have crossed too many black cats’ paths or broken a clubhouse mirror.

For him to win again, he must recite twenty-one Hail Mary’s, avoid stepping on any cracks, and wear a rope of garlic throughout the rest of the road trip. If nothing else, that might cause enough solitude for him to be alone with his thoughts and get his act together.