Giants Diary: Ready or Not, Bring on the Snakes 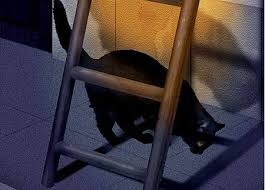 Well, It looks like the NL bungled home field advantage this year.

All in all, a perfect dud of an All-Star Game, with the exception of the Evil Empire's ageless closer getting his just recognition. Otherwise, this was not Bruce Bochy’s most shining moment. But that’s baseball. At least the fourth-place NL West team he's running will be rested and hopefully ready to deal with the first-place Diamondbacks.

As the Giants go, so goes some of their overly synchronistical fans. The Police warned us about synchronicity. Some overly sensitive Giants fans may also be suffering from the same symptoms as I am.

The play-by-play announcers often state that; hitting streaks, losing streaks, poor hitting, pitching or defense can be contagious on a ball club, but they never mention that fans can also become so inflicted. Unfortunately, lately my luck has been mirroring that of the Giants. Why, just the other day there was this black cat in the road ahead of me … Worse still, I accidentally squashed a lady bug. But I gave it a good funeral.

Not-so-longsuffering G-fans hope that the June and July swoons are over with. Now is the time that all Giants fans must avoid, in no particular order: black cats, strolling under ladders, stepping on cracks, and for gosh sakes, don’t break any mirrors! It’s up to Giants fans to stay the course and not let their fears of a funeral to the Giants 2013 season overtake them.

It is therefore strenuously anticipated that the Orange and Black can soon pull out of their funky funk. Hopefully all of the good vibes from Timmy’s buoyant no-hit performance on his last start can give the Giants a boost out of the gate against the dreaded Vipers, if they can just stay away from that Goldschmidt fellow.

It is somewhat regrettable that in beating the desert reptiles, they could be helping the Dodgers. But that’s just the dues that the Giants must pay for their chance at a playoff berth.