Giants Diary: Phillies Are a Giant Pain in the Neck 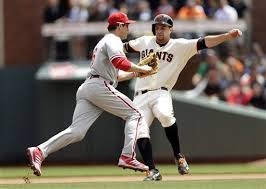 Hopefully the Phillies will see fit to throw the Orange-and-Black a bone in the final contest of the season’s opening series between the two venerable franchises.

Giants fans hope that the team's last two losses are merely a freak occurrence and in no way will reflect the remainder of the young season.

Even in a worst-case scenario, where the team goes into a tailspin and leaves for fishing trips in early October, as long as they continue to kick the Dodgers’ butts, then the year can be called a success.

But no buts about it, the reigning World Series Champs are still the team beat. We all know that the Phillies must still be holding a Giant grudge for that little 2010 comeuppance. They deserved it, though. The Phils were awfully full of themselves by that point, feeling that they were some kind of dynasty. In reality, they were merely a Philly flash .

Every team that gets their butts whipped in the playoffs is always looking for revenge the next season, and the next, and the next ad infinitum. Ad nauseam to that and Giants fans will not be in a hurry to see the ex-runner ups in any of the near futures.

With those terribly politically incorrect redskins coming at us, the Giants will have to be brave to face the Georgian gargantuans from the Confederacy. Oh yeah, that little conflict is over. Somebody please tell that to those Deliverance guys. Give it a rest, OK? Take a Halladay.

No more horsing’ around though guys, time to ride those Phillies out of town with an extra loss tagged onto their record.