Giants Diary: Orange & Black Keep on Fighting Until the End 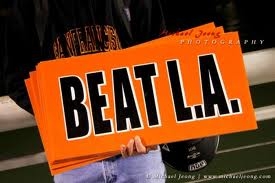 The San Francisco Giants are on a tear.

It is a great way to begin the end to an otherwise depressing 2013.

Trouncing those multi-millionaire Dodgers does take a little sting out of very nearly tying the all-time record for post-World Series futility established by the Marlins. G-fans were thus granted some modest bragging rights. The timing of Hunter Pence’s -- and to a lesser extent, that of the Giants -- resurgence, after the team has been eliminated from contention, is not quite what fans might have hoped for, but better late than never.

One wonders if, in Pence’s hot streak, we are witnessing the phenomenon that has come to be known as the contract year. That's when players who are in the final year of their contract -- and often after one or more poor seasons -- suddenly start feeling their oats to produce at Herculean rates hitherto not seen from them.

No one is likely to accuse Barry Zito of this shortcoming.

With the recent flat tire they gave to the Mets, the Orange & Black can feel a little better about not keeping Zach Wheeler on their spokes. Angel Pagan, being such a professional, could never admit the feeling of exhilaration that he must have experienced in deflating the Mets in the opening salvo of the Giants vs New York week.

It's fun to watch the irrelevant teams of the NL West duke it out for third place honors. The Padres appear to be under the influence of a similar motivation as the Giants to end their wilted 2013 hopes on an up note.