Giants Diary: No Substitute for Reds 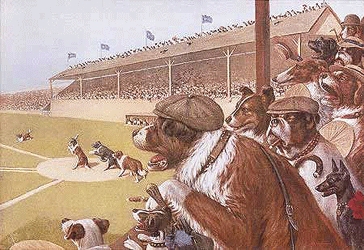 The first meeting between two of the most senior franchises in baseball's storied history since the fateful October 2012 NLDS was quite satisfying for the Cincinnati Reds.

Between the Giants' hitting and Mike Kickham in the pitching rotation, San Francisco is playing like they are on reds. Giants fans should all be issued a supply of the naughty depressant to get them through these harrowing times.

Fans of both teams are still holding grudges. The comments from both camps on MLB were pointed and heartfelt. The Reds fans want to sock it to the Orange and Black for sending their team home fishing to end their 2012 season. There remain Giants fans who believe Dusty Baker blew the 2002 World Series with an attack of Buffalo Bill-itis, a condition that afflicts some managers of teams when they get to that particular sport’s version of ‘the big stage’. Otherwise competent managers have been known to go brain dead when suddenly thrust into the glaring spotlight of national and international media coverage.

One example of the affliction was seen in the 1993 World Series, when Phillies manager Fregosi insisted on running out an ineffective Wild Thing, simply because he was the pitcher who ‘had gotten them there.’ Fregosi was oblivious to what was obvious to everyone in the stadium and millions watching across the globe that Mitch Williams just didn’t have it.

That Ramon Martinez fellow blowing the easy late-inning grab was the nail in the coffin for the 2002 Giants. He really put the moan into Ramon for Giants fans. It was a certain poetic justice that Brian Sabean traded him at the first opportunity the following season. He saw it; he knew it. That’s why Sabean is a great GM. He knows that it’s best to dump the players or managers who can’t deliver the goods during games that matter most.

And he is quick to reward even players that may be mediocre during the regular season but can get it done during the playoffs and beyond.