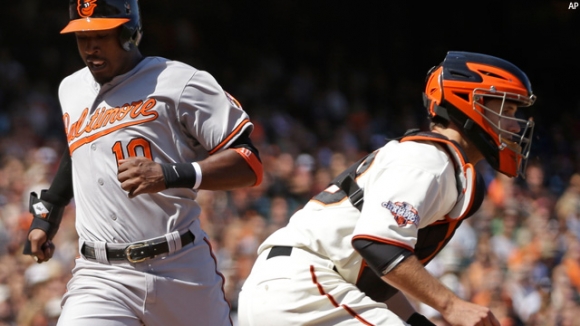 Over the years of the Dodgers' doggy-ness -- from 2010 through 2012 -- when the Dodgers were somewhat bankrupt and mediocre also-rans with only a few notable exceptions, Giants fans, on the various websites where comments are allowed, were not extremely kind to Bums boosters.

Now that the cleats, not Eastwood’s, are on the other Nikes, Giants fans are getting a perhaps not undeserved drubbing from the aforementioned D-fans. The party’s over for the Giants and their fans for 2013. This October, they will be reduced to watching the Dodgers in the playoffs.

What makes last place so much more harder to stomach is the accompanying ascendancy of the Dodgers, proving once again the superiority of money over matter (unless, of course, you're the Oakland Athletics or Tampa Bay Rays). Here are two clubs that are going in opposite directions. One last chance remains to salvage some pride by winning the last remaining games with the Los Angeles Dodgers of Los Angeles.

Through the murkiness of the view from the cellar, G-fans have some cause for genuine optimism for 2014. These are, not necessarily in the correct order:

The 2013 MLB season transpired exactly as Dodgers fans had envisioned it would. Some kind of a time warp has thrust the Giants back into an ethereal Candlestick-ian era.