Giants Diary: Lincecum Doesn’t Stink as Bad as We Thought 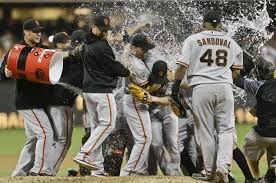 The Freak was back with a vengeance for a little poetic justice before the All-Star break.

Maybe there is yet hope for the diminutive dynamo and his struggling compatriots after all. In giving the semi-resurgent Giants some modest reason for optimism, Timmy was a giant amongst Giants. He assumingly didn’t even need any psycho-enhancements like his predecessor across the country -- Dock Ellis -- purportedly did.

The Orange and Black came together to back up Lincecum’s sterling performance. They did it with the leather; with amazing defensive gems like Tubbo’s, Crawford’s and Pence’s. They did it with the wood. The Killer P’s -- Pence, Posey and Panda -- were finally doing what G-fans had hoped that they would do together more often, namely, pound the pants off the opposition. In taking the last three games from their cellar trade-off compadres, the Padres, San Francisco can feel somewhat warm and fuzzy going into the All-Star break.

It does seem that most no-hitters are hurled against teams that are in last place, just as the last one before Lincecum’s. The hitters on last-place teams are still professional hitters and it doesn’t diminish the impressive accomplishment of a no-hitter in any way. However, I think it does because, well, they are in last place for a reason.

Timmy is still a great pitcher but has had poor run support the last couple of years. Along with his no-hitter, Tim’s other exploits are well known. But his and the Giants' records are still the pits. In the long run, as the Eagles might say, that doesn’t matter. Because in the forgiving NL West, all poor play is forgiven.

With more such exemplary team play, as personified in the final three of four wins against the lowly Padres, the Giants can re-right their sinking ship and rewrite the seemingly Titanic-like outcome of their current pitiful 2013 season.