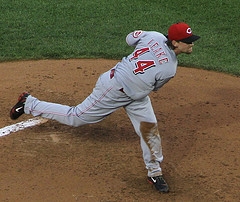 You know that things are going bad for the Giants when Manager Bruce Bochy comments that the team's next opponent is a club that's been playing quite well lately!

I suppose that, for as pitiful a franchise as the Cubs have become, winning four of their last ten games is a hot streak. Perhaps Bochy may be forgiven for feeling, like Giants fans must, that they’ve been down so long that even the Cubs look like up to him.

Cincinnati's Mike Leake, generously throwing a bone to the dogs that have done had their day, said the Giants are “still a tough team." I imagine that Leake must need to project the perception that he and his fellow Reds are earning their mountains of dough. After all, Cincinnati fans -- like all baseball spectators that continue to pay through the nose for a hot dog or soft or hard drink at the park -- need to feel that the high-rolling concession fees are somehow justified. Don’t know if even Madonna can justify that love. But Bob Marley can. Still, Ringo and George's sentiments are closer to the mark.

The truth be told, in 2013, the Reds have made mincemeat out of the lowly defending World Champions. Yet, can that ever even slightly atone for their abject folding at home in the 2012 NL Division Championship Series, when it really mattered? Not Hardly, Yardley. Not one iota, Iacocca.

Nevertheless that fact must be providing Dusty Baker’s dozens some little quantum of solace. If the fan comments from the Reds’ MLB.com site are any indication, there is a small number of Reds fans who think Mr Baker and his Trusty Toothpick have their weak spots as a manager and accessory. There were even a few visiting Giants fans that oozed solidarity with those miscreants.

The Giants, at seven games off of the lead, may be just another flounder in McCovey Cove at this point. Of course, there is a certain peace that comes to teams that are hopelessly out of contention. Fans can take pleasure in the sleepy pace and mellow flow of the ancient rites of the National Pastime, thus enabling their good selves for harmonic planes of greater appreciation and enjoyment, without the unhealthful stresses of the dog-eat-dog competition attending those pennant partisans’ contests.

Thus freed to more fully appreciate the picturesque surroundings, especially at lovely AT &T Park, fans are able to contemplate the finer things.

Just wait ‘til next year! Then we’ll really have something to bitch about.