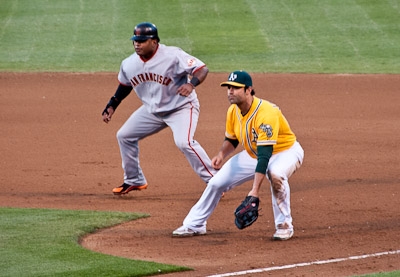 Call it what you want, Giants fans have had it with losing.

This wasnt supposed to be how things turned out. I feel like Steve McQueen at the end of Sand Pebbles. Wot the hell happened!

One great thing about living in the San Francisco Bay Area is that, as a baseball fan, one can emulate the wise rats that leave the sinking ship. It looks like right about now, this funk soul brother is bounding off of this particular sinking ship.

How about those Athletics, though! The A's are a wonder. They are so underrated and even more unloved. Even with their newfound success, the fans still stay away in droves. Yet, if only other teams would charge the same price of admission, what a wonderful world it would be!

On a shoestring budget and with a bucket of steroids, the A's make the boatloads of money spent by the Angels look positively satanic. It does seem evil to name your team after a city they do not rightfully represent. Maybe their record the past two seasons is karma.

One might speculate that being in the exciting 2012 AL Playoffs must have earned Oakland a little extra dough to help ameliorate their small-market blues. Playing in that incredibly ugly Oakland -Alameda Coliseum, the A's always seem to get a break in the court of public opinion. Thats just the A's, people exclaim. They have to play dirty. After all, look at where they have to play, how poor they are! But should any other team do it, watch out! It's time to march against the sinners. No one seems to so much as bat an eye when they hire yet another juiced up has-been to bolster their' every thang's a buck' lineup.

That's why I was surprised and disappointed when they didn't hire Barry Bonds to DH for a few more years. I guess even the A's draw the line somewhere. He was robbed, though. They should have let him get to 900 home runs. None of that ever seems to matter as Coco Crisp, Coco Channel, and Bartolo Colon have found their places.