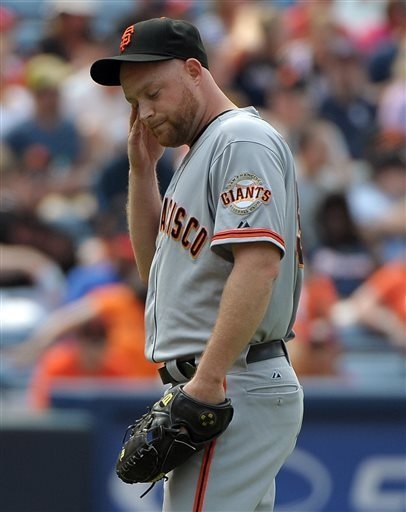 Apparently, the bigger they are, the sharper the Tomahawk Chop becomes.

This was some of the new wisdom that the Giants were able to take back with them to San Francisco as they recovered from a grueling road trip that saw a lot of positives along with their losing record.

Things didn’t turn out nearly as bad as they might have. And two of the Killer P’s -- Buster Posey and Hunter Pence -- were killing the ball. The pitching, less Vogelsong  and plus Gaudin, did pretty well, really. Matt Cain put on a splendid anniversary performance of his storied perfecto. Lincecum battled and was let down by some shoddy defense from the Orange and Black (OK there were quite a few missteps as well!) and was denied by Atlanta's competent defense plus some plain bad luck. Zito, well, he should do better back in the comfortable environs of AT&T Park. And Romo proved to be human at an inopportune time.

The Buffalo Bills of baseball -- more often the bridesmaid and only once the bride -- the Braves made up for it by playing the Bride of Frankenstein to the Giants. San Francisco was lucky to prevail over them in the playoffs way back when, but they often feel Atlanta's revenge during the course of the regular season.

The Giants won’t have to set foot again in Georgia for the regular season, when the firewater of the post-season seems to get the best of them. In addition, by then the Giants might be able to resurrect a trade for John Wayne.