Giants Diary: Bochy Star of Show as Giants Bite Back 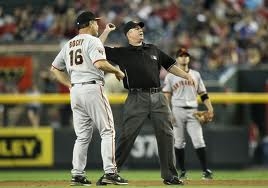 Manager Bruce Bochy must know that arguing with the umpire is a fruitless pursuit. Or is it?

Maybe his mid-game ejection last night was just what the club needed.

The San Francisco Gianta came back to score two runs in the eighth to topple Arizona, 6-4. The Giants bailed out a somewhat effective Matt Cain from enduring yet another loss to start the season.

That’s the good news. The bad news is that the Panda -- by now you know that's Pablo Sandoval -- is being attended to by the team vet. With Pablo, if there isn’t some accompanying drama, then there is something missing. Now would be a great time to sweep the Diamondbacks on the road.

Bochy is key to accomplishing this. With his managerial prowess firmly established, perhaps it’s time for him to get more demonstrative. It seemed to work well during this first confrontation between the reigning World Champions and the Snakes in their desert lair. But is it a formula that can be repeated?

Can something be worked out between the umpires and MLB that would allow for managers to strut their stuff a bit more? What’s next, kicking sand on the umpire’s shoes? That would be bad form. While it’s true that the view from Snarksville can be somewhat skewed, this Snarker can’t help but love the most cherished moment of moments when a manager, not happy with the way things are going -- like Billy Martin or his understudy Lou Pinella -- were always so adept at providing.