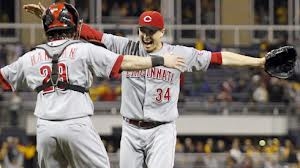 My grandma can no-hit the Giants right now. And she’s no longer with us. RIP, Granny. The automatic pitching machine in the clubhouse already has four no-hitters against the Orange and Black this season. The real story here is that Tim Lincecum is pitching pretty well for a scrawny little guy.

Unfortunately for Bailey, for the above reasons, any statistical mention of this second no-hitter should be accompanied by an asterisk. When all is said and done, it’s simply another loss for a last-place team. Those facts notwithstanding, the Giants are the envy of all of the other cellar dwellers in the majors. They're just three games out of first place. Not bad for a last-place team; better lucky than good. So here’s a message for our fellow botto- feeders: Pfffft!

The refrain in the dugouts of our brethren Dol-finks, Sausages, Great Blue Northerners, Stinky Sox and L'Astros sounds one harmonious chord:

“Why, oh why can’t we be in the NL West, where poor teams like us have a fighting chance!”

Eat your hearts out, suckers!

Now, here’s an idea. Why not add a wild card for last-place teams? The best last place team gets to go to the playoffs too. It’s only fair. A fitting realignment to console the smaller-market franchises, like the luxury tax. The poor team’s write-in candidate: meet the Giants.

OK, OK. Bailey is a great pitcher. But remember that Lincecum was once great not so long ago also. And look what happened to him, one step away from the bullpen and one season away from unconditional release.

Homer had better invest his money wisely now because today’s phenom is next year’s has-been.

Matt Cain had a perfect game; has it helped him this year? Not much. It looks great on the résumé but may not be of much assistance when he’s out of baseball in a couple more seasons after a few Tommy Johns.

Granted, it will bring a few extra customers to Bailey’s Burgers in Banff.