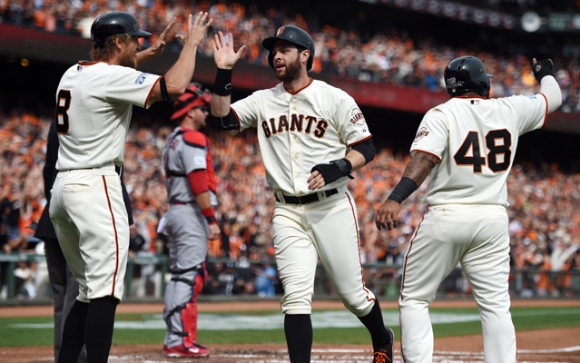 Ill winds blew in the City by the Bay, and they took the St Louis Cardinals' hopes for victory with them.

After a pair of tomahawk swings highlighted a first inning that put a run on the board and placed teammates on each base, San Francisco Giant LF Travis Ishikawa launched a John Lackey hanger that had grand slam written all over it.

However, the stiff breeze blowing across AT&T Park kept the ball in play, pushing it downward as it approached the right field wall where Cardinal RF Randall Grichuk could collect it for the rally-ending route.

Except Grichuk didn't realize he could do that. He read it as a wallbanger and moved to play the carom, a decision that plated three runs for the Orange & Black.

Lackey only gave up one hit during the rest of his six-inning stint, allowing the Cardinals to chip away. Ultimately, it was Grichuk crushing a Tim Hudson offering to left in the seventh -- apparently, St Louis' designated inning in the post-season -- that tied the game at 4.

Bochy's boner in driving his Hudson further than his gas tank would bear had put the outcome in abeyance.

However, he was redeemed in the tenth.

That's when St Louis loogy -- lefty one-out guy, sort of a specialist's specialist -- Randy Choate committed the loogy sin of walking a lefty hitter, Brandon Crawford. Cards manager Mike Matheny left him in because he figured, correctly, that Juan Pérez would be bunting. But the Giants left fielder botched it twice.

Ironically, as he then was told to swing away, Pérez lined a single to left, setting the stage for Gregor Blanco to take his turn at bunting.

And that's how the Orange & Black came to lead the NLCS, two games to one.

If Grichuk makes the right read in the first inning, this game could've ended 4-1 for St Louis, and a certain loogie would've taken in all the late-inning action from the bullpen.

But the Giants know that's not the way the wind blows for their post-season karma,