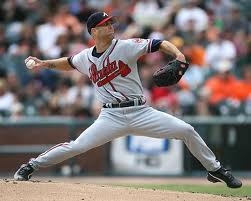 Our Friday baseball bargain shopping takes us to San Francisco, where the Giants host the Atlanta Braves in the second of a four-game set from AT&T Park.
The Giants send Matt Cain (1-2; 5.57) to the hill off an encouraging outing Sunday when he picked up his first win of the season. Cain went 7⅓ innings and allowed only a run in a 4-3 win over the Dodgers. That victory brought Cain's ERA down nearly a full run as he entered the game with an ERA of 6.49.
We won't get too pumped up over one good win after a few bad ones, as that's not enough to prove Cain is back to form. Tim Hudson's résumé is the one that has earned our backing. Hudson is 4-1 with a 3.83 ERA, but his recent dominance of the Giants is what makes the Braves the play here. Some of his success is documented in the Bovada data tool provided on our Home page.
Additional statistical support: Hudson is 6-0 against the Giants over his last 10 starts, with an ERA of 2.25. Hudson is also in a nice groove at the moment, surrendering 4 runs over his last 14⅓ innings.
One concern may be Hudson's performances on the road this season; he has an ERA of 5.29 away from Turner Field. But two factors should help him here. First of all, the 'Tomahawk Choppers' are swinging their sticks well recently, batting over .300 and averaging over seven runs a game in their four wins that have come over their last five games.
AT&T Park is also one where pitchers often find their 'calling,' known as one of the tougher hitting parks in the majors. But the most appealing combination is getting Hudson and his recent success (both overall and against the Giants) as well as the Bovada line, which has Atlanta as a slight underdog at +105.
Too many factors and too good of a pitcher at too good of a price to ignore. I don't know how bold the pick is, but it is Braves.
My pick: Atlanta Braves     +105
---
UPDATE:
Result ... San Francisco 8 Atlanta 2     Giants cover
DAILY UPDATE