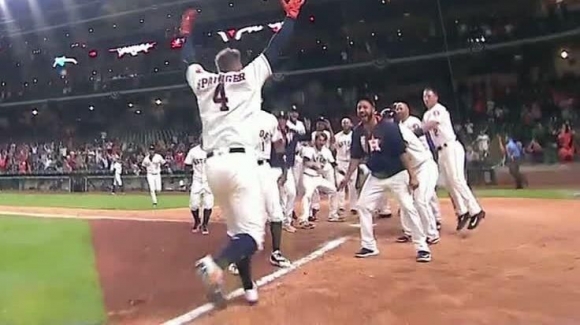 http://cubbiescrib.com/2017/02/23/chicago-cubs-kyle-schwarber-to-bat-leadoff-in-2017/One of the interesting things about following MLB is tracking the statistics.

It seems like every day, something obscure is happening behind the numbers that we haven't seen in a very long time.

While this happens fairly regularly, it's still really cool.

However, here's where the plot thickens.

The very next day, Springer led off the bottom of the first against the very same Mariners.

This very rare feat hasn't been accomplished since 1990 when someone named Roberto Kelly did it for the Yankees.

Obviously, this unique back-to-back scenario can only be done by a lead-off hitter, which would explain the rarity. The fact that Springer leads off is almost more interesting, sorta like an American League version of Kyle Schwarber.

When you consider the number of lead off hitters who actually homer on a consistent basis, the pool narrows even more.

So keep up the good work, George Springer.

He may even get the chance to do this in October.