Game Fish: Marlins Putting Up a Fight ... and Then Some 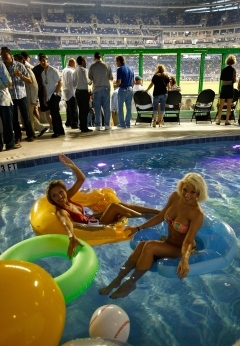 This bottom feeder bit a brace of players in June.

Vegas lines had weighed heavily in favor of the Miami Marlins ever since the 2013 season began, and for good reason. Expected to be the National League's version of the Houston Astros after owner Jeffrey Loria abandoned ship on his high-priced talent at the end of 2012, the Floridian Fish got an early start on tanking the entire year.

That's the stuff that loads up the juice on the other team. And that's what happened. And players were happy to lay it, because at 14-41 after two months, the Marlins were such a predictable tomato can that even spending dollars to make pennies was putting money in the bank.

23-year-old Giancarlo Stanton returned from the disabled list and proceed to show why he's the most coveted trade target in baseball. If he stays healthy and avoids scandal, Stanton is this generation's best bet to claim the career home run record and return it to respectability. He returned to the lineup, such as it was, on 10 June and proceed to go 21-for-67 -- a .313 clip --  with five home runs, five doubles, nine runs scored and 13 RBI in 17 games.

20-year-old José Fernandez, who made the leap from A-ball to The Show, continues to have one of the liveliest and most accurate arms in the game this season. He hit a high-water mark against the high-flying St Louis Cardinals in mid-June, fanning 10 and even driving in a much-needed run to highlight a 5-4 victory over the team with baseball's best record at the time. In fact, it was part of a series win against the Redbirds, allowing the Pittsburgh Pirates -- themselves trying to snap a 20-year sub-.500 curse -- to ultimately claim the mid-season distinction of having baseball's best record.

Currently, Fernandez has the fourth-highest average fastball velocity in the majors -- 94.7mph, behind only Matt Harvey, Stephen Strasburg, and Jeff Samardzija -- with a K-rate of 9.1 per nine innings pitched. The latter is the second-best for a 20-year-old in baseball history; it tops the likes of Dwight Gooden (8.7), CC Sabathia (8.5), and Fernando Valenzuela (8.4). Ironically, only Rick Ankiel (9.9) is better.

With Stanton and Fernandez spearheading the charge, the Marlins posted a 15-10 record in June. Only the Pirates (17-9) exceeded it.

And Fernandez is still at it. Last night, he fanned another 10 batters while walking only one and allowing just two hits through  eight innings on the way to shutting out the San Diego Padres. His ERA dropped to 2.72 through 16 starts, with opponents managing only a .193 average against him and his 94/33 K/BB ratio. Thus, at the season's halfway mark, the second-youngest player in the majors -- only Bryce Harper is younger -- looks to be the real deal.

Miami's surge has been about more than two headliners, of course. Logan Morrison also returned to the lineup with immediate effect, rookie Marcell Ozuna jumped from long-A ball to make a surprising impact, and fellow youngsters Jacob Turner (obtained from the Tigers in the Anibal Sanchez trade) and Nate Eovaldi (acquired from the Dodgers in the Hanley Ramirez trade) have shown consistency in the starting rotation that belies their inexperience.

Those two pitchers underscore the sterling job Miami's front office has done to identify talent on-the-cusp to at least give its side of the fire sales a puncher's chance of realizing value.

Nobody is under any illusion that the Marlins will be anything more than a spoiler this season, and the team has yet to prove it can sustain its performance over the course of a season. (Again, ask the Pirates about that; they've had two straight strong runs at finishing above .500 for the season, only to falter in September.) And they're still a bargain on the money lines; tonight's game in Atlanta is set at +225/-260 on Bovada.

But do know the rest of the National League has taken notice.

And because this is a Jeffrey Loria team, MLB's general managers have never stopped watching.