Gómez Does a Puig; Pirates Not Amused 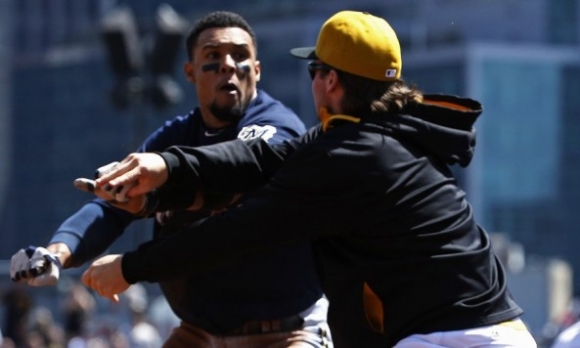 The Milwaukee Brewers' up-and-comer Carlos Gómez definitely adds spice to a lineup that desperately needs it.

He just needs to remember that there's a difference between baseball's version of it and hockey's.

For whatever reason, the young outfielder likes to add anger to élan when he provides a highlight. Like yesterday, in the third inning of what was a scoreless game at that point:

Now, Cole had fanned Gómez to start the game, but there were no histrionics from either side afterward. However, Gómez expressed displeasure about striking out to a Pirate pitcher in Friday's game:

At least, when Yasiel Puig prematurely celebrates a faux homer, he atones for his error and leaves it at that, as seen in his memorable early exuberance during last year's playoffs:

But, alas, Gómez is making a habit out of confrontation instead of celebration. Check this out, when he should have simply been satisfied with the violence in his swing:

Afterward -- and it was a long afterward, as this game went 14 innings before the Brewers prevailed, 3-2 -- Bucco hurler Gerrit Cole said it started when he expressed his displeasure over Gómez's bat flip.

If so, than both players need to take a deep breath and chill. Oversensitivity in the public arena rarely ends well.