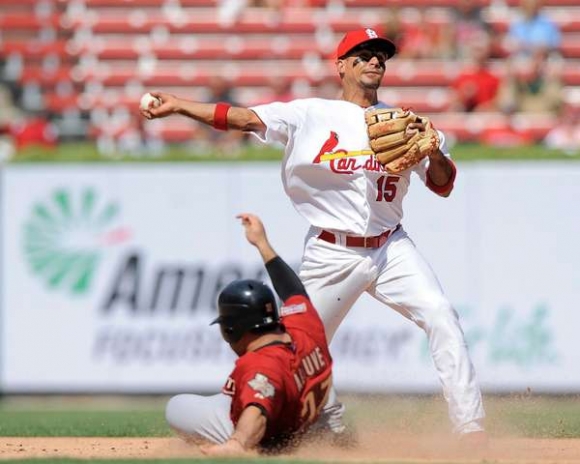 Here's this season's St Louis Cardinals Inevitability #2: Which prospect goes in order to acquire his replacement?

Could it be someone else who throws 100mph, but from the mound? (Furcal's throws to first have been clocked at that speed.)

St Louis has a couple of them, with one -- Trevor Rosenthal -- just being assigned to the bullpen. That leaves two more flamethrowers -- Shelby Miller and Joe Kelly -- battling it out for the last spot in the starting rotation. Could the other be a centerpiece for a trade? Add to that mix 2012 first-round draft choice Michael Wacha and raw talent Carlos Martinez, both of whom would be possible targets for a team willing to give up a front-line shortstop.

GM John Mozeliak has some thinking to do:

This all started when Furcal opted to go holistic last August, and the Cardinals were fine with his decision. Keeping in mind their run to the playoffs was an improbability at the time, they seemed content to use Ryan Jackson and Pete Kozma as patch-ups. For whatever reason, St Louis soured on Jackson; however, Kozma got hot at the right time and gave the team more than they ever could have imagined.

But the front office has determined that Kozma is not a long-term answer. So what's next?

Baseball America has anointed the Cardinal organization as builders of the best minor-league system in baseball. They have the bargaining chips. While some are untouchable, others are current luxuries. Take Matt Adams, a power-hitting first baseman with nothing more to prove in the minors. He's the insurance if Alan Craig goes down, but with Ty Wigginton signed as the proverbial veteran bench presence, Adams is destined to start the season in Memphis. Unless.

A pre-season trade is unlikely at this stage. The obvious target all winter has been Cleveland's Asdrubal Cabrera, but the Indians wanted more than the Cardinals were willing to pay at the time and seem willing to pay now. Thus, it remains to be seen how long Mozeliak's Cedeño-Kozma gambit can do its part to keep St Louis in the NL Central race with Cincinnati and Milwaukee.

The Cardinal GM is no doubt hoping to make it to the non-waiver trade deadline on 31 July, when more options should be available, both for his team (Carlos Beltran? Jake Westbrook?) and others.

Meanwhile, Rafael Furcal can only fantasize that his imminent cast could become a Cocoon. Right now, Cardinal Nation would join him in that wish. It's the ultimate irony that a team so rich in prospects is so stuck for a solution.