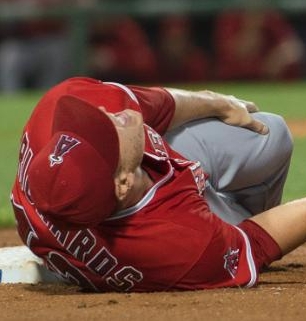 No sport can come close to baseball when it comes to listing a litany of strange accidents.

And do check out the last item in that link. You can't make that stuff up.

Now it's the Los Angeles Angels from Anaheim who are shaking their heads in wonder at how these things happen. For good reason, too. There they were, hunting down and finally overtaking the sabermetric Oakland Athletics, due in part because right-hander Garrett Richards was having himself a season.

And then, last night, this:

From the looks of it, Richards may have just as well stepped awkwardly off a curb because his mind was on other things. Let that be a life lesson to us all.

Richards' misstep while adjusting his footwork to hit first base isn't the first time an Angel had issues like this:

In fact, a compelling argument can be made that there's no such thing as a guardian angel, especially for an Angel.

So there it is. Not exactly what Vince Lombardi meant when he said, "The knee. Always the knee."

Playoffs are made and World Series are won with 40-man rosters, so it's time to see what else the Halos have in the tank. Richards was tabbed to be a key factor in 2014, he delivered, and the Angels were on the verge of reversing a recent string of underachieving seasons.

Now, their next step had better be a sure one.