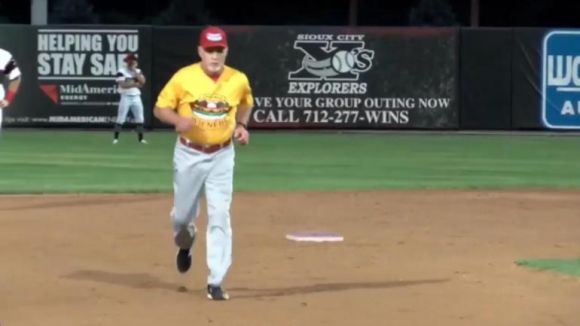 However, Butch Hobson appears to be personally committed to changing this reality.

The former MLB player and Boston Red Sox skipper has seemingly been tossed from every single game his Chicago Dogs have played during the month of August, with the ejections becoming increasingly spectacular and unhinged.

You may recall his literal base stealing episode from a few weeks back.

Well, the crazy bastard may have topped that madness with his latest public breakdown:

Yes, that was a grown man pantomiming a home run and then running around the bases.

Actually, it was more like a slow amble, but he certainly seemed to enjoy himself.

His team's culpable as well, enabling poor Butch with the handshake at third base and subsequent dugout celebration.

Of course, while this behavior is borderline at best, it's also wildly entertaining.

Dude's been perfecting his craft for a very long time now.

That was Butch tossing the umpire out of a game back in 2011.

In addition, it appearsHobson had already performed the base-stealing gambit when he managed something called the Nashua Pride, complete with adorable child in the stands.

This man may be a genius, but give him a wide berth just in case.