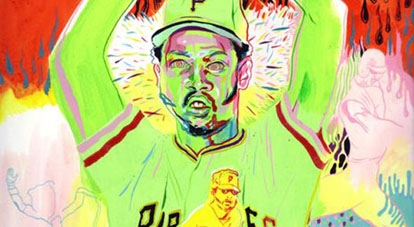 Every 12 June marks the anniversary of one of the most amazing feats in all of sports -- not just MLB -- when Dock Ellis of the Pittsburgh Pirates threw a no-hitter while under the influence of LSD.

If one has ever partaken of hallucinogenic drugs, just finding the baseball would be challenging enough, let alone throwing it and catching it.

Ellis made it look easy, though, although he admitted he wasn't even able to see the batters.

Maybe he’s unlocked the ultimate secret to pitching success by imagining the hitter isn’t even there. Either that, or just taking some high-octane blotter acid when it’s your day to pitch.

There have been many incredible accomplishments in baseball history, such as:

But Dock Ellis hurling a no-no under whilst journeying to the center of the mind ranks right at the top.

Some of the details of that fateful day remain controversial and downright unfathomable, since Ellis didn’t show signs of impairment upon entering the ballpark.

Of course, this wasn’t the case in May 1972, when Ellis and fellow Pirates teammates Willie Stargell and Rennie Stennett tried to enter Riverfront Stadium and were asked by a security guard for identification, which Stargell and Stennett provided. Ellis, on the other hand, rebelled against such requests and was subsequently maced because he appeared drunk and made “threatening gestures with a closed fist.”

Ellis started the 1971 All-Star game, where he gave up one of the longest home runs in baseball history to Reggie Jackson at Tiger Stadium in Detroit. The ball landed on the roof in right field some estimated 600 feet from home plate.

Things didn’t get much better for Ellis as the decade progressed. He claimed the scariest moment of his career was when he attempted to pitch while sober in a 1973 game.

Now check me if I’m wrong, but most pitchers would prefer to trot out to the mound sober. Not Ellis.

Things got much worse in 1974, when he hit three batters in the top of the first inning against the Cincinnati Reds because he was pissed off at teammates for being intimidated by the Big Red Machine.

So, you know, let’s throw at them and get them more pissed than an agitated hornets’ nest.

Dock Ellis never medically verified his story, but the circumstantial evidence is overwhelming. MLB has never officially admitted it, but they're still stumbling around on the latest revelation that they let Alex Rodriguez take PEDs in 2007. Instead, we're left with a man of legendary proportion with the kind of folklore that is bestowed upon Nessie, Sasqutch, and Dracula.