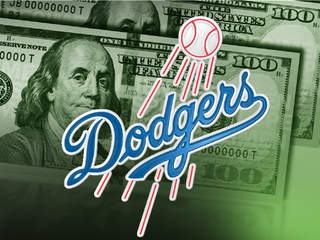 Devo's got it right.

This is a beautiful world.

Much has been wondered about what new the Los Angeles Dodger brain trust of Ops Prez Andrew Friedman and GM Farhan Zaidi would do with all that wonderful dosh after being constrained so tightly in Tampa Bay and Oakland, respectively.

No matter that the A's and Rays succeeded without going cash crazy. Now, running the Bums, Friedman, Zaidi & Co can do stuff like this:

But that wasn't the point. The usual futures move of Los Angeles getting Baltimore's 2015 compensatory draft pick in exchange for shipping $2.75million in cold, hard ones to the Inner Harbor.

That bolstered their position for this year's harvest.

And that's apparently what they were after. Webb was doomed from the start; DFA in Baltimore, and released today by Los Angeles. Fortunately for his immediate career, though, Cleveland picked him up and plopped him in AAA Columbus.

Bottom line for the Dodgers is that they paid big for this spring's 74th overall pick.

Dude had better pan out.

If so, it'll prove that the Bums' new brain trusters can now do for millions what they used to do for scratch.

That should warm the wallet of everyone who plays a part -- from that in-stadium experience to cable bills -- in financing Dodger Nation.