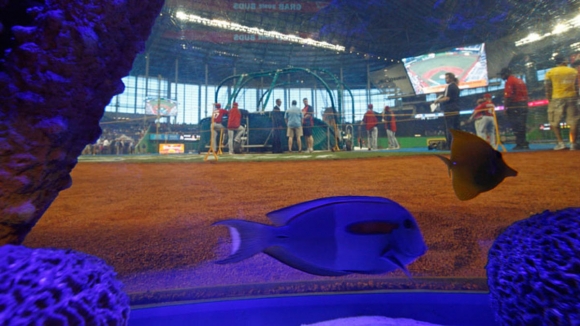 It's been firmly established that Marlins Park is, without question, the tackiest ballpark in MLB.

In fact, it'd be competitive in a tackiest place on the planet contest, if such a thing exists.

The abomination that is the home run sculpture in the outfield usually serves as the primary object of derision.

However, a new contender has emerged.

Yes, there is an aquarium behind home plate.

Until now, of course.

Fortunately, there's a layer of protection in front of the actual glass, so it appears at least one person in this organization is capable of rational thought.

Animal rights activists objected strenuously to the aquarium-behind-home-plate idea, even after being assured that the tank couldn't be punctured.

Apparently, the fish may not be particularly fond of the noise and vibrations at field level.

In addition, they probably don't enjoy being part of the Marlins theme park masquerading as a baseball stadium.

So, the fish appear to be safe.

For the moment, anyway.