First, Let's Kill All the Umpires 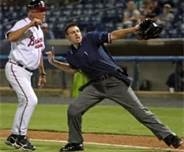 It's me, Mr Wonderful. In your infinite wisdom, could you please see things my way and kill all the umpires in MLB? Then maybe you could send them into a hellish purgatory where they might suffer for all eternity? Thanks God, and if you have heard my prayer, then please give me no sign.

I have lived through thirty-five years of The Jeffersons in syndication. I have survived massive hemorrhaging of the eyes and ears while being subjected to those Kardashian pigs. The pasta slurpin' ginzos from the Jersey Shore couldn't kill me although that mind-numbing harpy, Flo, from those Progressive commercials nearly did. The thought of John Sterling's rambling blow-hole polluting the airwaves as he's pointin' north in that smoke filled booth with his pants around his ankles kills me as well.

So what is the common denominator here? Besides the fact they have yet to plant me in the bone garden? It is simply that they all lend significant credibility to the pre-natal test for Down's Syndrome and that they will all be judged for their crimes against humanity. With that being said, there is another group of snivelers whose crimes are so egregious and so blatant that no amount of monetary fines or time in the joint can justify ... major league umpires.

Turn on any baseball highlight show and you will be guaranteed to see two things:

In a day and age where we see three or four teams' play-off aspirations coming down to the final week or day of the season, we are reminded of those games during the year where an umpire's horrible call cost your team the win that could have made the difference between that team going to the playoffs or going home. All because they refused to get help on a call from their crew or were too arrogant to review the play to actually get it right.

My question is, why does it even have to get to that point? Why can't we just run 'em outta town on the first thing smokin'?

Remember Don Denkinger costing the Redbirds the 1985 World Series? The whole world saw it, but he didn't. Sorry St. Louis, better luck next year! Or who can forget Motown's Armando Gallaraga and the perfect game he lost with two out in the 9th last year? Jim Joyce was so sorry for costing that kid a place in baseball history but upon being questioned as to why he simply just didn't take a minute to review the play and correct the mistake, his answer was, "I think next time I will."

Still the beat goes on. Occasionally, we see the umpires review a critical call and make the change if necessary, but it seems as though they never do it when it counts. Why is that?

It's because umpires are egomaniacal, prima-donnas who somehow have it in their minds that the fans come to the ballpark to see them! They are never wrong, and if you question them about anything, you get tossed.

I'm talking about the biggest issue facing baseball today. The erosion of the strike zone. It's so prevalent now, it's almost second nature to these clowns. It isn't bad enough that these umpires' strike zones are the size of a postage stamp when it's supposed to be from the chest to the knees? Pitchers are getting tuned-up like never before because they are forced to throw it right down the pipe in order to get a strike call. Ques Tec, anyone?

Want to see a change in the way umpires call balls and strikes? Let them know they are expendable, and if they don't go back to basics, they will be replaced by a machine.