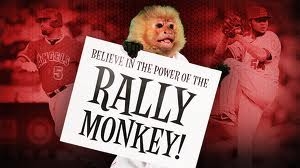 And I think there's a significant amount in the Astros vs Angels game Friday night in Anaheim.

The Angels' season, filled with millions of dollars worth of high expectations, has so far been nothing short of a flop. Much of their problem lies with off-season free agency acquisition Josh Hamilton and second-year outfielder Mike Trout. The two have combined for a lowly .225 at the plate with a homer and five RBIs between them.

Things havent been much better on the mound for the Halos, either. Their team ERA is a lofty 5.42; only four teams have a worse collective ERA.

Tonight, manager Mike Scoscia gives the ball to Tommy Hanson (1-0, 4.50 ERA), who won his only decision over the weekend in spite of up three runs in six innings at Texas. Hanson, a former Atlanta Brave, has had success against the Astros in the past. He's unbeaten, standing at 4-0 lifetime with a 1.29 earned run average.

While that can be a bit of a concern to Astro fans, I like their chances tonight with Bud Norris. He has a win under his belt against the Rangers in the season opener on 31 March. As you will also see from the Bovada data tool on our Home page, Norris has never faced the Angels before.  He has faced two of their players in the past and fared well; Albert Pujols and Chris Iantetta are a combined 6-29 against the right-handed Norris, with Pujols's 5-26 making up most of that.

With that type of success against Pujols, and the rest of the Angels lineup having problems at the plate already, I will be banking on the Astros to bring home a win tonight (and putting my money where my mouth is on that, too!). I don't know how often I would bank on the Astros to bring home the bacon this season, but this might be an opportune time, especially considering they will also be coming into tonight's contest swinging red hot bats, having combined for 24 runs in their last two games against Seattle.

Again, much of what successful bettors do is not always go after the winner but take an occasional shot on value. And this is a great time to do just that.