Fair Dinkum: Dodgers, D-Backs in the Land of Oz 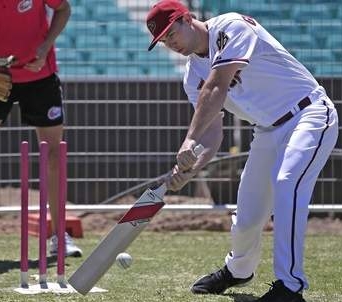 A century ago -- 3 January 1914, to be exact, in the middle of the Australian summer -- the Chicago White Sox edged the New York Giants, 5-4, at the fabled Sydney Cricket Ground before 10,000 fans.

Despite the impressive attendance at the time, it's fair to say baseball didn't exactly take off in the Land Down Under.

That would explain the lukewarm notice when the Arizona Diamondbacks were the first to arrive there in a chartered 747 at 6am Aussie Eastern Time today:

The Dodgers landed in their chartered 747 a few hours later.

Unlike previous season openers away from the North American continent, this one isn't being played in a baseball hotbed. And maybe the two games there are sold out -- 40,000 tickets -- but here's the sort of everyday dude down there they'll need to upgrade:

It could take another century.

The continent is on its second go-round with professional baseball. The first modern league folded in 1999 after ten years of trying to make a go of it. That's when former Milwaukee Brewer catcher, seven-year MLB vet, and Aussie citizen Dave Nilsson stepped in and bought the rights. It's a cozy little six-team operation right now, with some MLB teams chipping in their minor leaguers to help bolster the talent level.

Needless to say, the league is hoping for a boost from the games in Sydney, noting that fellow Aussie Ryan Rowland-Smith will not only be in the bullpen for the Diamondbacks, he's also scheduled to pitch in Arizona's exhibition game against the Australian national team. The Dodgers are also slated for a similar exhibition.

It cost A$2million -- about $1.8million -- and two weeks to transform the cricket ground into a baseball stadium:

One patch of ground that won't be touched is the wicket. That's the center of activity in cricket, which is tended year-round with loving care. Cricket bowlers -- its version of pitchers -- can bounce a ball to the batsman, so the wicket's condition is vital. Thus, the outfielders have been made aware that balls landing there could experience unusually high bounces.

The list of Australians who played major league ball includes a few standouts. The Land of Oz is quite successful in the sporting endeavors that have become popular there, and MLB is clearly trying to add itself to the local scene. Rugby and footy reign supreme, so perhaps MLB has chosen the right two teams as ambassadors.

Some Aussie ballplayers have already taken their lead:

Fair dinkum. Time for a few tins of Castlemaine XXXX.