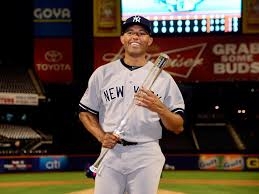 Did you catch the All-Star game last night on Fox?

Has the stench of Joe Buck and Tim McCarver worn off yet?

Could you tell Chevrolet was the main sponsor?

If you answered yes to all of these questions, then you also know this game was about Mariano Rivera and his final All-Star game ever after 13 appearances.

Rivera will be a first ballot Hall-of-Famer, possibly the first player to get 100% of the vote, and is regarded as the greatest closer ever, which begs the question, why the hell didn't he get the save?

I mean, Joe Nathan is a fine pitcher, but with all the hoopla -- Fox even ran a rooftop interview conducted by Joe Buck, whom I really don't mind as an announcer; it's his color commentator who needs to hang it up, along with Rivera -- you'd think Jim Leyland would have done everything in his power to get the ball to Rivera in the bottom of the ninth after he jogged in to Metallica's Enter Sandman.

But what does Leyland do? He lets Rivera pitch the eighth inning, where the players showed some class and let him have the field to himself.

Nice touch. The Tiger skip wanted to make certain Rivera pitched with the lead, as he's accustomed to doing.

OK, let’s get to the action on the field, where the American League won 3-0 backed by tremendous pitching and a single display of actual offense from Cleveland’s Jason Kipnis.  The game started off with a bang, literally.  Mike Trout doubled down the right field line on the first pitch he saw, and then Matt Harvey, the NL starter from the host New York Mets, nailed Robinson Cano right on the front of the knee with a 98mph cut fastball.

McCarver’s analysis: “Too much knee.” Thanks, Tim!

Cano had to immediately leave the game with what’s being termed a right quadriceps contusion (think bruising, swelling, sharp shooting pain), and lip readers got a good chuckle out of what he said to Harvey as he gingerly walked past the mound.  No censorship required!

The AL finally got on the board in the top of the fourth, where Miguel Cabrera hit a sharp double and would later score on a sacrifice fly by Toronto’s Joe Bautista. Remember, I said there was only a single display of actual offense, since the NL managed to scratch out only three hits! In what was really the highlight of the game, Detroit’s Prince Fielder laced a ball off Pittsburgh’s Jason Grilli into the gap in right-center and chugged out a triple! This man is listed in the media guide at 5’11”, 275 pounds, and he slid headfirst into third just ahead of the tag. It was a one-man running of the bulls!

Manny Machado of the Baltimore Orioles made one of the best plays ever by third-baseman and will clearly be featured on a web gem montage. He threw out Arizona’s Paul Goldschmidt from practically left field foul territory with zip, zeal, and zest.

The final run of the game came on an RBI double from Jason Kipnis. Perhaps more impressive than the RBI double was his actually making contact off Atlanta’s flame-throwing closer, Craig Kimbrel, who set a record for the highest strikeout ratio -- 16.66 K/9 IP -- last season. He didn’t lead the league in swings and misses for nothing, folks!

Finally, in the bottom of the eighth inning, the great Mariano Rivera entered the game to pitch in his final All-Star game and was greeted to an empty field as the position players stayed in the dugout to let him have a moment. As is customary with most of his outings, he pitched a scoreless 1-2-3 inning, inducing two weak groundballs and a meaningless lineout to left by the Cardinals' Allen Craig.

Rivera was named the MVP, which was a foregone conclusion regardless of whether the AL won the game or if Rivera even pitched!

Congratulations on a terrific career, Mariano, and enjoy your silver bat trophy and 2014 Chevrolet Avalanche!