El Duque and the Great Escape 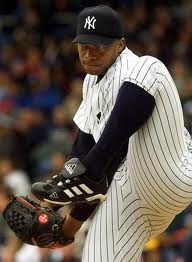 I'm just curious. Is it me, or is Bartolo Colón pitching like he ate Greg Maddux?

Anyway, as we all know, it's now the hurricane season, and there is a monster Category 5 bearing down on the Eastern Seaboard. The good people at the Hurricane Research Institute in Coral Gables, Florida are considering naming this one 'Alex Rodriguez' with the logic being that it won't end up hitting anything ... anywhere.

Speaking of useless people, I recently had a 'discussion' regarding some of the more contemporary, clutch post-season pitchers with a group of ill-tempered Yankee ginzos, and -- wouldn't you know it? -- their first reaction was to blurt out "El Duque!"

The exchange of dialogue resembled something like this (think John Travolta in Saturday Night Fever):

"Youze guyz remembuh dat story about El Doo-K and how he had ta escape from bein' poisecuted in dat place it wuz weah he wuz borned right?"

"Yeah, my gawd, he like, swam he-yuh from dat place and he had all deeze shawks eatin' at 'em while he wuz woikin' hiz way ova he-yuh! Di'nt dey come out wit a book 'er a moo-vie about his exploitasions and all dat?"

"I also hoid dat supposeably he had ta take all deeze subscriptions for all da tings dat was wrong wit him cuz when he washed up on ta dat beach dey found 'em at he wuz pretty much D-E-D dead rite youze guyz?"

So basically, they had read El Duque's book and were laboring under the delusion that this guy was pitching for some penal colony team in French Guyana. Then, during a start, at the beginning of the 7th-inning stretch guillotine show, he made a break for it through a most inhospitable jungle while being tracked relentlessly by Mel Sharples and his blow-gun toting man-hunters.

That is, of course, until he happened upon the edge of a cliff, in a cloud-line, where he'd stashed a pre-fabricated pile of coconuts lashed together as a makeshift flotation device. He had assumed that if he survived the jump that his uncanny sense of direction and the Prevailing Westerlies would help deliver him right into a throng of scum-bag sports agents waving work visas at him as he washed ashore.

Oh ... and that was only if he survived the perilous 90-mile journey with no sunscreen while being menaced by massive great white sharks circling him continuously as if he were a dead, bloated Pilot whale.

The geriatric pitcher was later quoted as saying, "It would have been much easier, and quicker, if I'd just hitched a ride with the rest of the guys during the Mariel Boat Lift when I had the chance."

I know, it makes great fodder for the press, right?

Except that it was later learned that after a start for the Cuban national team he was transported down to a waiting Carnival Cruise type, ABSCAM-like pleasure ship.

Once aboard, he was being fed grapes by naked chicks who were also fanning him with great big palm leaves. The scouts waiting for him on the beach could tell he was coming, 'cause they could see him pointin' north from 90 miles away.

So the moral of this story is ... how does a 71-year-old guy end up pitching so well in the play-offs so often?

I can't be sure, but you can just ask any Yankee fan.