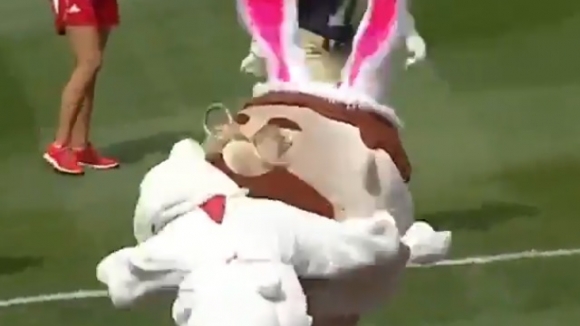 Apparently, the reason for the holiday season is gratuitous violence.

On Easter Sunday, a game between the Washington Nationals and Philadelphia Phillies was marred by an ugly incident between the Easter Bunny and Teddy Roosevelt.

After a day of providing large quantities of candy to kids everywhere, the Easter Bunny decided to potentially traumatize these very same children by brutally assaulting the former president.

The following footage is quite graphic:

As you can see, the Easter Bunny was assisted by an assortment of mascots in this dastardly act.

Here's the actual death blow on Roosevelt, slowed down for full effect.

Sadly, this isn't the first incident involving the Easter Bunny at a Nationals game.

A clear pattern of behavior has been established.

At press time, the Easter Bunny had reportedly gone underground with his crime syndicate, no doubt already plotting for next year.

When will this mascot madness end?