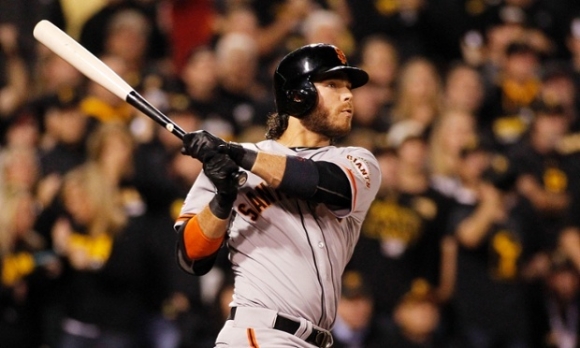 Waking up Thursday morning, Giants fans had to be asking themselves, was it all just a dream?

Was it some ideal wild card playoff scenario envisaged by a fan's wildly over optimistic imagination of how events should transpire, according to perfect, infallible and unassailable Giant logic?

But it's really, really true. The Giants sort of won a pennant! As did those underdog Royals. Well, a kind of wild card pennant.

Treading on new promotional ground for new implementations of the wild card, the Giants conveniently accentuated the positive of being in the post-season, albeit as also-rans.

During the 0-0 phase of the wild card contest, when the Orange & Black loaded the bases, I was thinking --in my Giant mind-- that Brandon Crawford had a good chance of knocking one out here. After all, he did make it to double digits in dingers this season.

Dude can definitely pick his moments!

Though all G-fans were probably on the same page there.

So, they're in. And for all the forecasters who saw a Nationals sweep in the NLDS, looks like their crystal balls were a bit too hazy to get an accurate read.

The Giants are doing what they've done before. Stepping up when it counts in the post-season.