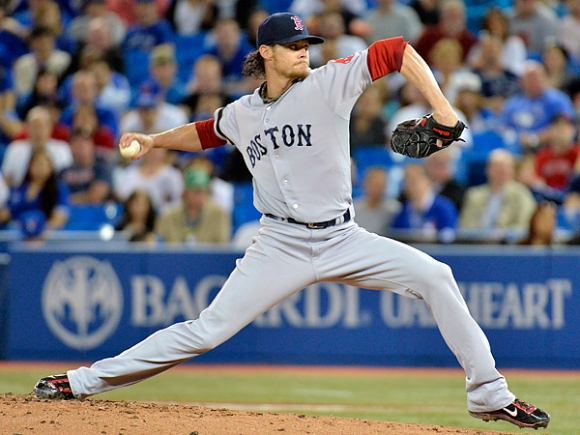 While the Boston Red Sox pitching staff takes a miserable beating at the hands of the Baltimore Orioles, their best starting pitcher, Clay Buchholz, is sidelined with his annual injury.

Buchholz led the staff with a 9-0 record alongside a sterling 1.71 ERA and a downright nasty 8.6 K/9 ratio. The problem is that the last time Buchholz pitched was 8 June against the Angels in which he went 6⅔ innings, yielding two runs and striking out four. Since then, Buchholz has been nothing but a tease, reporting that he could come back within a few days but is probably still a week away from pitching.

Without Buchholz, the weaknesses of the Sox pitching staff are put on view for the American League. Jon Lester has been plowing along but struggling of late; with Buchholz pitching, he can fly under the radar, but now he has been thrust to center stage. Lester is the ace, after all, but with each outing worse than the last, Sox fans everywhere must begin to wonder: how much longer can their success be sustained without their best pitcher?

After taking a beating in the Rays series and the 13-inning marathon in Baltimore, the Sox bullpen has been overworked due to a series of short efforts from the starters. Without Buchholz’s ability to come into a game and shut down opposing offenses, the bullpen may continue to be overworked. Considering Koji Uehara’s age and Andrew Bailiey’s uncanny habit of getting injured, that could be a problem down the stretch as the Sox kick it into high gear in their quest to secure a playoff spot.

There is some good news, though: Buchholz has reported that he will be set to return for Tuesday. He threw at 90 feet in Baltimore the other day and will throw a bullpen on Sunday in preparation for his start versus the Rays on Tuesday. As the AL East tightens up, the Sox will need their stopper back in the rotation if they expect to protect their lead.

Currently, that lead is growing slimmer with each day Buchholz sits on the DL.