Dodgers Too Shifty for Seth Smith 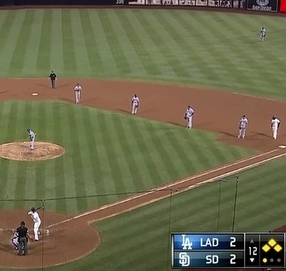 Wee Willie Keeler's famous quote is now merely an echo in the wilderness.

The Hall of Famer had the obvious answer when asked how he kept such a strong batting average.

I hit 'em where they ain't.

Decades of statistical analysis confirm that this works. And yet, to many of today's left-handed batters, you'd think you were asking them to help Sisyphus roll the boulder up a hill.

They're not there to roll. They're there to lift. As in launch a pitch over the fence. Specifically, the right field fence.

Fielders have noticed this. So they've tended to gather on the right side in order to do something about it. Incredibly, this tactic works.

Just ask Seth Smith. Two nights ago, in the 12th inning of a 2-2 tie with the bases loaded, the Los Angeles Dodgers dared him with a super-shift. They actually put four infielders on the right side; left fielder André Ethier joined in the act, leaving only third baseman Justin Turner all by his lonesome. Lotta open space on the left of second, then. So with the game on the line, what did the Padre slugger do? What else?

San Diego won the game one batter later, no thanks to Smith. The least he could do -- and he did -- was beat out the double-play.

Boston's David Ortiz will occasionally bunt when he leads off an inning because of the shift. He picks even those moments, though.

St Louis' Matt Adams spent $25,000 on a pitching machine in the off-season so he could work on taking pitches oppo. As a result, Adams doesn't see many shifts anymore.

Note that Adams didn't bunt. He merely went oppo. Power hitters don't have bunting in their skill set, and teams don't want their mashers to bunt. Fair enough. That makes sense. But going oppo can still be done with power, usually more effectively than trying to jerk a middle-out breaking ball.

Sooner or later, this is going to be an issue at contract time. And that's probably the only way it'll dawn on these dudes why Keeler's in the Hall and they're not.