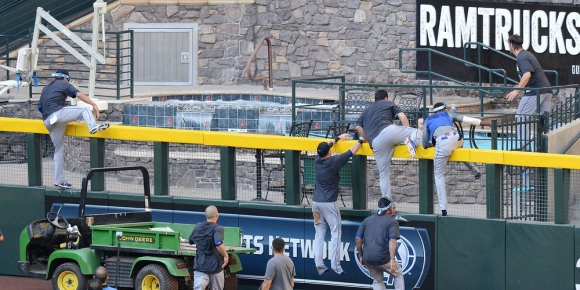 The Red Sox magic number is one, so they could be AL East division champs before summer officially ends!

Because celebrating a division title on your enemy’s home mound isn’t enough, the Dodgers took the celebration into the pool at Chase Bank field, which made members of the Arizona Diamondbacks none too pleased.

Even Arizona Senator John McCain weighed in, apparently not realizing it would be a tempting straight line. Too tempting:

No mention that he married into a fortune and is now worth $40million himself.

This is the same man who chose Sarah Palin as his running mate in the 2008 presidential election, so his credibility is as close to zero as it gets!

Diamondbacks President and CEO John Hall offered a backhanded compliment, stating that the Dodgers don’t have a pool at their old run down stadium, so they must’ve wanted to see what it was like.

Yeah, I’m sure none of the Dodgers players have a pool at their sprawling LA mansions, either!

Since the Diamondbacks were also eliminated from playoff contention, there will be no pool celebration in the post-season.  No word about Dodgers rookie sensation Yasiel Puig if he violated team curfew.  I’m sure there are some nighttime hot spots in downtown Phoenix where he could’ve found himself imbibing.

If the NL Central remains as it is now -- no certainty, though the stat geeks give St Louis a 65% chance of winning it -- the Dodgers would face the Cardinals in the Division Series which shapes up to be a classic October confrontation. Not sure where Los Angeles can celebrate in St. Louis as climbing the Gateway Arch isn’t really an option.

Will the Diamondbacks let go of this non-controversy or use it to keep trying to create a rivalry with the Dodgers?

Clearly the media has made it an issue, but what do you expect? They've got newspapers to sell!